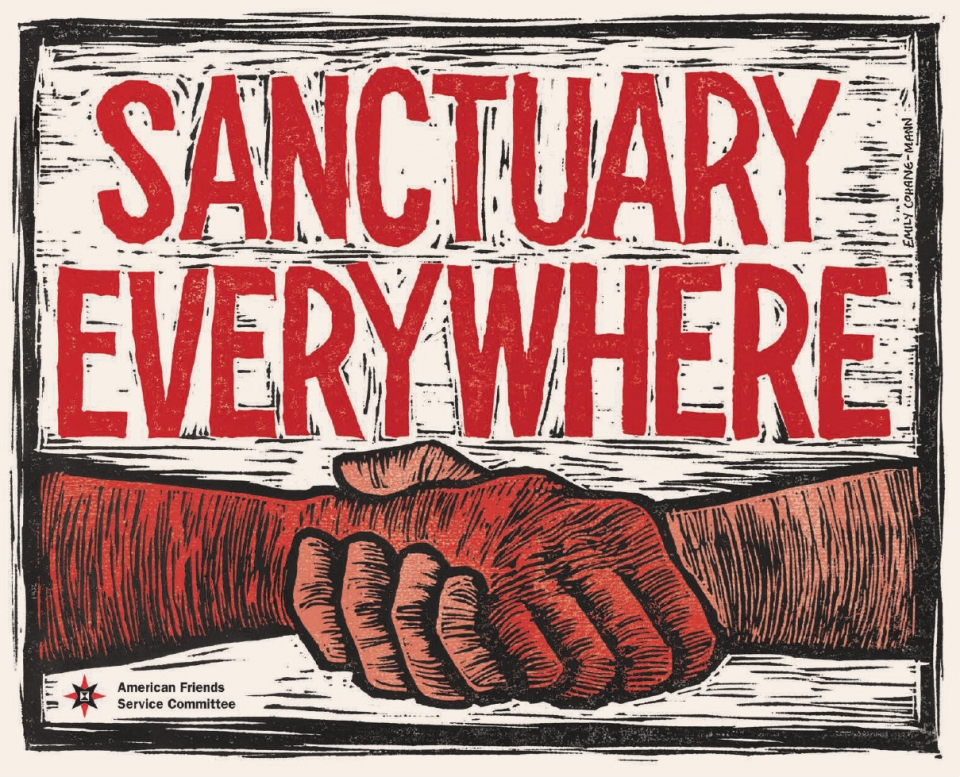 But Boaz answered her, “All that you have done for your mother-in-law … how you left your father and mother and your native land and came to a people that you did not know before. May the Lord reward you for your deeds, and may you have a full reward from the Lord, the God of Israel, under whose wings you have come for refuge!’
(Ruth 2:11–12)

Throughout history, the people of God have provided safe space in their places of worship for those vulnerable under the laws and customs of the time. The Hebrew people had cities of refuge for persons wrongfully accused of crimes. In the years before the American Civil War, congregations provided safety for slaves fleeing the South in the Underground Railroad. In the 1980s, more than 500 U.S. congregations provided safe houses to Central Americans fleeing civil war but whom our government refused to acknowledge as refugees.

Today churches are providing sanctuary to people with final orders of deportation. Law-abiding parents and workers caught in the clutches of a broken immigration system are entering houses of worship to fight their orders of deportation from a safe space. Congregations are standing with families at risk of separation.

WHY SANCTUARY AND WHY NOW?

Eleven million undocumented persons are living in the United States, the majority of whom have lived here for more than ten years. They are our friends, neighbors, and family members. All are at risk of deportation.

Year after year, Congress refuses to pass immigration reform. Meanwhile, the U.S. continues to fund an 18 billion dollar a year immigration enforcement system that continues to deport persons with significant ties in the U.S. The film Journeying in Hope, captures the strife felt by families and ministries on the border that are offering witness and support in the midst of this crisis.

Many church communities refuse to sit by and watch another family torn apart. Congregations are standing alongside members of their church and community by hosting legal clinics, writing letters of support to judges and immigration officers, and accompanying those in deportation proceedings. These acts of solidarity are, sometimes, enough to stop unjust deportations. When they are not, some bodies of faith are offering sanctuary.

DECIDING TO OFFER SANCTUARY OR TO SUPPORT SANCTUARY

The decision to offer sanctuary should not be taken lightly. Some cases are right for sanctuary and some are not. The social witness of sanctuary is only powerful if it matches the strategy of the person with the order of deportation. It is important that you have a good relationship with the person entering sanctuary and that person’s attorney so you can decide together and with all the right information. Also, the climate under the current administration has become stricter as it directs the Department of Homeland Security in implementing immigration law; and therefore, greater numbers of people are at risk of detention and deportation. Immigrant advocates are encouraging allies to think about responding not only by providing physical sanctuary, but acting in ways that provide protection, security, and solidarity with at-risk communities. The Office of Public Witness has created a resource, Sanctuary: A Discernment Guide For Congregations, that can assist you prayerfully consider appropriate responses.

In addition to weighing whether to support sanctuary, here are two other things to consider:

Is sanctuary legal?
This is a question a session needs to discuss thoroughly with an attorney before a church offers sanctuary. Congregations that offer sanctuary can certainly be charged with the crime of harboring, but could they be convicted? While the congregations offering sanctuary today are not bringing individuals into the country, there is a question of whether they are harboring. The law forbids the act of harboring someone in a building who is known to be remaining in the U.S. in violation of the law. Some courts have held that harboring requires that the person being charged actually hide the person remaining in violation of the law. If harboring does require hiding or concealing a person, these churches are not in violation because they are all publicly calling on the government to rectify the final order of deportation of the person living in sanctuary. Unfortunately, there is also case law that defines the act of harboring as providing shelter. If simple shelter with no concealment is harboring, then all the churches offering sanctuary and any family member or friend with an undocumented person within their household is in violation of the harboring statute. While we pray this is not the case, both decisions with their conflicting definitions need to be considered. When discerning sanctuary please use this resource created by the Office of Immigration Issues to begin your conversation with a local attorney.

What does the PC(USA) say about sanctuary?
The General Assembly of Presbyterian Church (U.S.A.) has made the following statements about the offering of sanctuary:

1984 – On Supporting Those Arrested for Working with Central American Refugees
1985 – On Protesting Clandestine Government Surveillance of Church Meetings
1986 – In Support of Refugees from Central America and Public Sanctuary
1988 – On Dealing With Concerns Regarding the Sanctuary Movement and Refugees
1999 – Transformation of Churches and Society Through Encounter with New Neighbors
2014 – On the Global Crisis for LGBT People and Their Families: A Presbyterian Church (U.S.A.) Response.
2016 – Resolution Reaffirming the Ministry of Sanctuary by Congregations; Response to resolution
In 2014 the former Stated Clerk, the Reverend Gradye Parsons, wrote this letter to the President of the U.S. about sanctuary.